- They say that blockchain is a tremendous achievement of civilization, like an internet was 20-30 years ago, and it will become unalienable part of our life in the nearest future. Is it a hype or does it have a longstanding perspective?

- I think that blockchain is a promise, that is irresistible. It is a promise of privacy, a promise of security, a promise of global interconnection. Once people have it in their minds that it is possible, they will never want to give it up. So, something may indeed amount to a transformative force and that something probably will be called blockchain. However, it is not necessarily going to be the technology that we have today. There are two ways in which blockchain exists. One is cryptocurrency. That is already having a major effect and is not going away. It will continue to be an important player in a global market. Let’s take art, for instance. It is not a secret that many people like to pay for art in a way that is not traceable. The high-end art is often bought and sold by people who want to hide the transactions. Cryptocurrency is perfect for that.

The other way is a business blockchain. This is blockchain that is used and sold by IBM, by Oracle, by Google and Amazon. They all now offer blockchain implementations. Business blockchain is a very different thing, since it is not intended to hide anything. When you look at the use of cryptocurrencies, one of the benefits is that you are hiding from the government. Nobody can trace what's going on. But when you come to business use, more regulated use of the resources, that is not good. Someone actually wants to monitor and regulate the transactions, so you need to find a way in which privacy is there, the guaranteed integrity of data is there, but regulation also exist. This is a different kind of the use and effect of blockchain.

- What is your vision of the cryptocurrencies?

- Original cryptocurrency (Bitcoin) has all kind of limitations. It is not scaled to become a currency of the world, since it is limited to certain uses. It is a great way to do money laundering. It is well known that a lot of drug-related money exchanges are done there. That's one thing. The other thing is that it is also used for speculation. People are just buying cryptocurrencies hoping that their value will go up so they can sell it. In this context it is just another commodity. But for real use, for real everyday legitimate business it is not suitable. It has limited number of transactions that can be processed per second/per day, and that's way lower than any significant bank processes every day. It is just not designed for that. There are many cryptocurrencies that are created using open-source technologies like Ethereum (https://www.ethereum.org/)and others that are adjusted and could be used for higher scale, but they are permissioned, the cryptocurrency that allows granting or revoking permission of access, security protections, allows therefore regulation. The latter is beginning to develop actually. One of the major US banks (J.P. Morgan, https://www.reuters.com/article/us-jp-morgan-blockchain/jpmorgan-chase-to-create-digital-coins-using-blockchain-for-payments-idUSKCN1Q321P) has recently announced the use of  cryptocurrency for internal transactions. It solves some problems, it allows people to move money faster, at a lower cost, it eliminates some of the intermediaries, but in that limited use its impact isincremental, in my opinion.

Nobody really knows where it is going to end up, but the idea is very intriguing and there is a lot of experimentation, a lot of venture capital going into the startups that are playing with this. Something interesting is going to come out of it. But how it is going to look 5 years from now – nobody can predict. It is still under development and requires a lot of innovation (business innovation even more than technology innovation).

- Where would you put cryptocurrency in the Gartner Magic Quadrant[1]?

Gartner Quadrants always compare things against a particular market objective. So, if you have database quadrant than you compare different databases against the objective of what people want to use a database for. If you put cryptocurrency in a quadrant of world currencies and you say the objective is democratizing access to financial transactions (that might be a reasonable objective), I would say that cryptocurrencies today are in the lower right corner - a lot of vision and not a lot of execution. Which means that it is very intriguing. very exciting, a lot of money is going into experimental work, but don't count on it changing your life. Yet.

- And what about a blockchain as such?

I think blockchain overall is higher up on the execution axis because there is some serious work now going on with blockchain for various use cases, including for the art markets. It is not yet accross the horizontal dividing line (that would require evidence of solid dependable maturity), but it is on the way, it will get there in some form (and under some name). On the vision side, there are a lot of great ideas for the potential use of the blockchain business model. So amongst the technology architectures for business innovation, it would belong firmly in the middle of the visionary quadrant.

- What is the future of tokenization/fractional investments?

It is really an interesting idea, a breakthrough innovation if it becomes a way of selling high value items (as it is already experimented with for art). Since, considering the costs, the high-end artworks are only accessible to the richest 0,01% fraction of the world, most people can never get access to this kind of investment. It is very exclusive. Tokenization promises to change it. This is what we find everywhere these days - democratization: giving access to formerly exclusive resources -- to a larger population (democratizing access to value and to power). I think that access to fragments of high-value things (art or anything else) has a lot of promise. I think people will start getting attracted to that exactly for the reason of democratizing, spreading the access, sharing the joy of modern living with the world.

That's from the point of view of social impact. From the point of view of technology, you have to trust the blockchain in order for this to work. If people are going to start making investments in these new different assets, they must be able to trust it. People are told by vendors that blockchain is immutable, unhackable, unbreakable. Yes, they may say, we are still working on it, but when it comes, it will be a completely trustworthy platform. And that will never happen. That's the problem. There are several reasons for that. First of all software always has bugs, you cannot avoid it. Second, anything can be hacked. The more sophisticated software, the more sophisticated hackers will work with it. Unfortunately, all this hype about blockchain creates the impression in people of excessive trust, of being able to depend on anything that is called blockchain. There is going to be a period of time when there will be a lot of disappointment in a blockchain, they will have to discover that it is not as unbreakable, as immutable, as unhackable as they were promised. Gartner has the model of hype cycle[2] - look at technologies as they emerge, become more and more popular, they go up in the amount of hype about them, they come to the peak of inflated expectations after which, inevitably, they start falling off. People discover that what they were promised does not work. Then you will hear that blockchain is dead, nothing works, it was all a mistake. This is common and we call it the “Trough of Disillusionment”, when you are at the bottom of that hype cycle. But then you come into production quality, into plateau of productivity. That will happen with blockchain too.

This is a thing to remember when you are planning and contemplating what the blockchain might do. Assess how far on the Hype Cycle the technology is. Understand that the high expectations of the early stages are likely to prove excessive. But also understand, the early disappointments are not the sign of failure and practical useful reality is likely to emerge, after all. Depending on your tolerance of risk, you may enter the field earlier or later, but regardless of that – you should always monitor the developments in blockchain: it is likely to have an effect on the business trends in general, and the business or the art markets in particular. 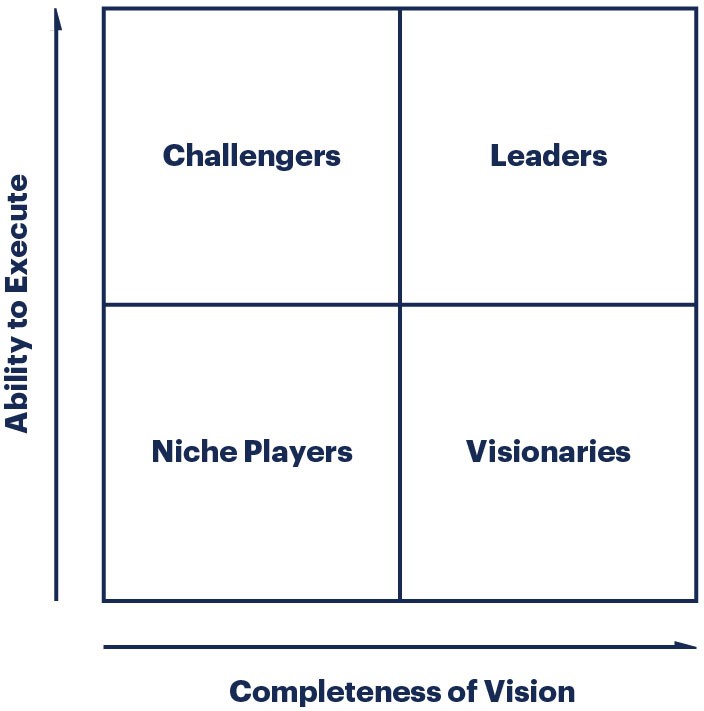 [2] Hype Cycles illustrate the promise of an emerging technology within the context of their industry and individual appetite for risk (source: www.gartner.com) 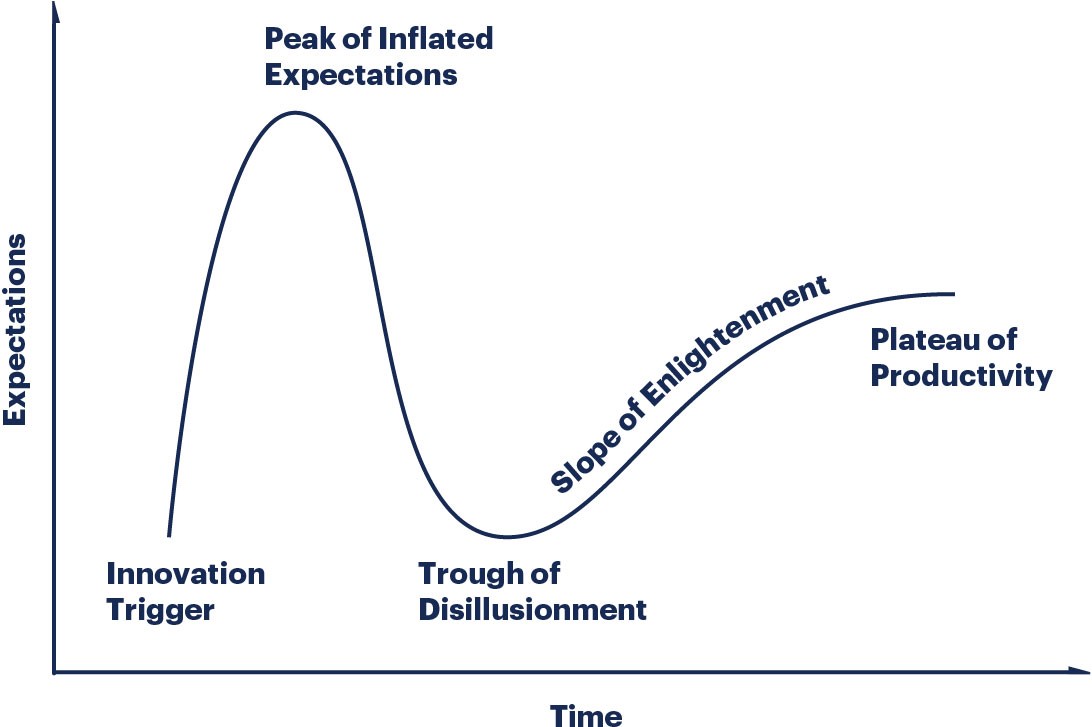